I’m not kidding.  Really.  But I’ll get to that in a moment.

Leon has this way of explaining things last minute.  I imagine that running a business while working as a Chef at a local hotel means that there isn’t a lot of room for extraneous details.  I arrive in Måløy by ferry late one night, left Bergen on one of the rare sunny days of my stay.  Leon picked me up and we drove the 40 minutes to Eid, catching up, chatting.  There’s a lot of “Oh, and did I mention…” .  He tells me that we’re doing an interview with a local paper the next day.  He tells me that there’s a party the following Saturday (in three days) for the Bakery, and I have something nice to wear, right? [I didn’t.]  Oh by the way, did I tell you… etc.   It’s pretty amazing, and great.  Kept me surprised, that’s for sure.

Now back to the Viking King.  We’re driving into Eid, and pass a big construction site on the fjord edge.  Leon tells me in his by the way fashion that there’s a viking king buried in a mound behind the bakery.  Buried with his ship as is tradition.  The town is putting more earth into the fjord. Building out into it for more space as they have done in the past.  And the structure that they are working on is going to be a museum for the Viking finds in Eid.  I’m not sure what I was expecting to see, but literally a mound of dirt in parking lot behind the bakery wasn’t it. 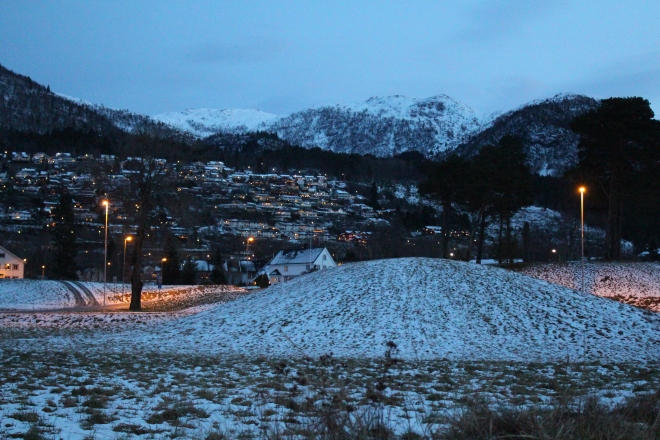 Leon said that Khang didn’t believe him.  I laughed, but honestly I couldn’t blame him.  It looks like some of the mounds my dad used to create with his tractor so we could ride motorcycles on new trails every year or so. No markings, no pomp and circumstance.  It’s just there.  It’s just so Norwegian. By the way there’s this huge archeological find, but we just know it’s there and live our lives around it.

I even hesitate to post this on the off chance that Leon was just screwing with me. Still, the point is that there’s a difference in the way that people think in Norway compared to the states.  I’m no expert, so I could be completely wrong.  But there are a lot of things that hold value in the U.S. that simply don’t in a country where religion hasn’t really held value in a long time.  There are things that don’t hold value in a society that isn’t based on capitalism. Of course there are more influences than those two things, and it’s much more complex than a few sentences in a quick blog can express.  My point is there are a lot of little differences in the way that our societies look at the world.  And it’s fascinating to me.  I have been spending a fair amount of time noticing the way that people in different places are still very much the same, how people are people with the same emotions and general wants and needs.    Still, the ways in which we diverge are also something I have been contemplating.   In social expectations, in mindsets about how the world should be.  Ideas of how to behave and react.    It’s an education for myself.  Makes me question my own ideas of how I think.  Or if not question, then to be able to reexamine them.  It’s not a bad thing, opening up your mind to possibilities.  To different views.    Suddenly the world is bigger and smaller and a whole lot more and less complex, all at the same time.   I plan to keep my eyes and ears open, understand a little more before I can tell you what I’ve learned.

This site uses Akismet to reduce spam. Learn how your comment data is processed.